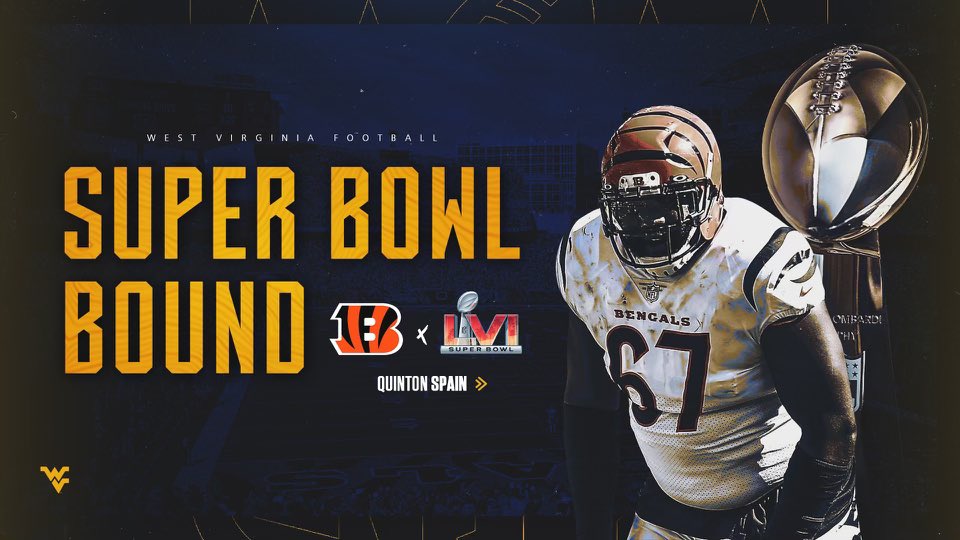 Spain, now in his seventh season in the NFL, will make his first Super Bowl appearance ever this postseason. After finding himself without a team following the 2015 NFL Draft, Spain signed with the Tennessee Titans, where he stayed for four seasons and menial success. In 2019, he signed a one-year deal with the Buffalo Bills, during which time he started all 16 games; he was released in October 2020. Little did he know… a Super Bowl berth was on the horizon.

Nine days later, he signed with the Cincinnati Bengals’ practice squad and steadily moved up the ranks to an active roster position at guard. In March 2021, the Bengals elected to re-sign him for a single season contract, and less than a year later, he’s gearing up to play in his first Super Bowl.

Of 21 former WVU Football players currently signed with NFL teams in the 2021 season, Spain will be the sole representation on Feb. 13 at SoFi Stadium.

Welcome to the new home of WVU football and basketball breaking news, analysis and recruiting. Like us on Facebook, follow us on Twitter and check us out on YouTube. And don't forget to subscribe for all of our articles delivered directly to your inbox.
Related Topics:featureMountaineers in the prosQuinton SpainSuper Bowl LVIWVU Football
Up Next