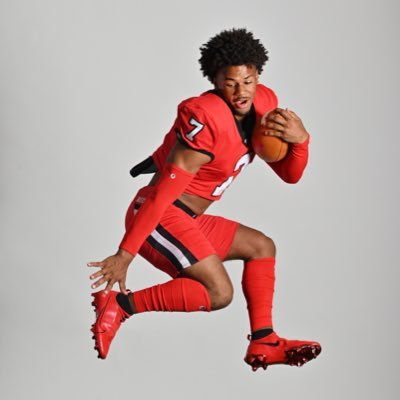 2024 running back Andre W. Devine (5-foot-8, 155-pounds), son of WVU Hall of Famer Noel Devine, is on campus today according to his Twitter. Devine is a currently unrated recruit who plays at North Fort Meyers High School in Florida.

WVU has yet to offer to offer Andre, but he has received three division-I offers already from Alabama A&M, Florida Atlantic and Marshall. Marshall was his first offer that he received back in May. At the time he was going by Andre W. Costa instead of Devine.

He is currently unrated on 247Sports and doesn’t have a profile on any of the other three major recruiting services (ESPN, On3, Rivals). He is listed as a running but according to his Twitter also plays wide receiver and defensive back.

As of now, West Virginia only has one member of the class of 2024 in three-star defensive lineman Richard James Jr. (6-foot-1, 270-pounds).

They have a large 2023 class of 18 commitments that is currently tied for the highest rated class in WVU history on 247Sports as the 24th rated class in the country on the service.

While certainly a strong class, it is likely to fall in the rankings as the calendar gets closer to signing day. That is assuming there isn’t another addition of a four or five star recruit as 14 teams with more such recruits remain ranked lower than WVU due to having less total recruits.

Andre’s father Noel entered the WVU Athletic Hall of Fame last year. He played at WVU from 2007-10 gathering 4,315 rushing yards and 29 rushing touchdowns in his career.

He was also used in the passing game and as a kick returner. He left the school as the career leader in all-purpose yards with 5,761 yards but has since been passed by teammate Tavon Austin who has 7,286 yards.

Welcome to the new home of WVU football and basketball breaking news, analysis and recruiting. Like us on Facebook, follow us on Twitter and check us out on YouTube. And don't forget to subscribe for all of our articles delivered directly to your inbox.
Related Topics:Andre DevinefeatureFootballNoel DevineRecruitingWest Virginia
Up Next