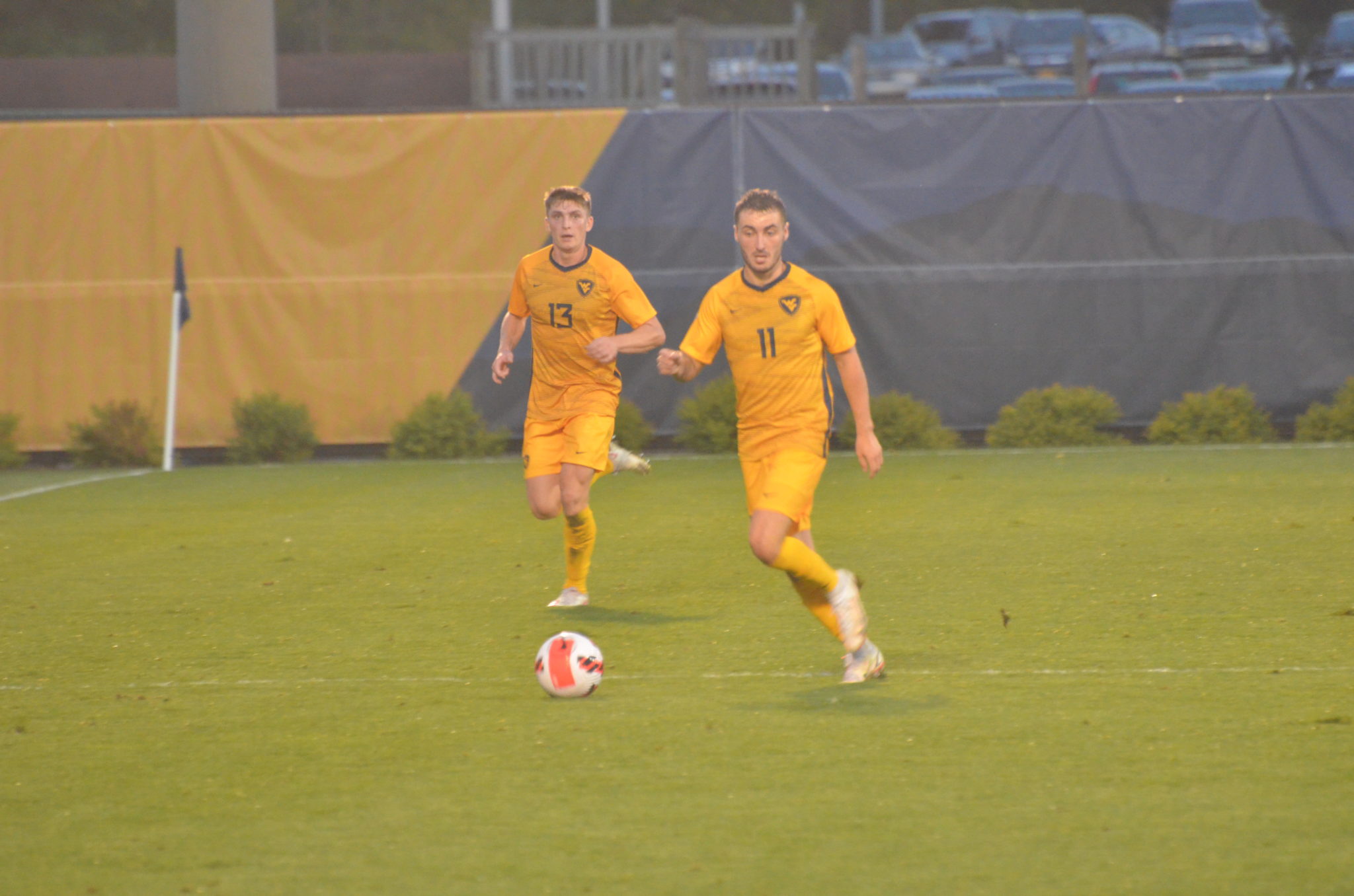 MORGANTOWN, W.Va. – Fourth-ranked West Virginia Men’s Soccer (4-0-1) traveled to Huntington, W.Va. to take on the No. 6 Marshall Thundering Herd (3-1-1) in a rivalry that’s now in its 24th meeting. For WVU head coach Dan Stratford’s team, the Mountain State Derby just means more. In front of 3,033 people, a new attendance record at Hoops Family Field, his team made that evident.

WVU has largely dominated the series, at 16-6-1, including 6-4 on the road. Today was no different.

It only took five minutes for WVU fifth year keeper Stephen Tekesky to be thrust into action, after a shot by Herd redshirt junior forward Milo Yosef sailed high over the goal. A second Marshall shot in the 11th minute off the foot of sophomore left back Gabriel Alves required Tekesky to fall on the ball. Yet another Marshall shot, barreled of grad midfielder Pedro Dolabella, failed to find the back of the net following a Marshall free kick in the 15th minute.

It took 17 minutes to see the first action, but when WVU senior forward Yoran Popovic found the space behind Marshall senior keeper Oliver Semmle, the game was off to a blazing start. The Mountaineers went up 1-0, but it was short-lived.

Dolabella came screaming back with a goal two minutes later, powering it past Tekesky to tie the game at one in the 18th minute.

Now tied, the Thundering Herd front line got antsy, tallying two quick offsides calls. In the 28th minute, Yosef tried once more to get past Tekesky, but his shot missed high. He finally found the hands of Tekesky in the 33rd minute, when a low rolling shot was nabbed by the WVU keeper.

In the 37th minute, the Mountaineers regained control, when a press found senior forward Tony Pineda close enough to chip the ball at Semmle, but it went high. Even though it didn’t land, that close call set the pace for sophomore forward Ciro Bourlot Jaeggi, whose low shot rocketed past the outstretched fingers of Semmle to put WVU up 2-1; in the 42nd minute, Stratford’s team now lead, and it stayed as such going into halftime.

In the 55th minute, WVU senior defender Aaron Denk Garcia put the first second half shot in the book, but it was saved by Semmle. Less than a minute later, WVU redshirt sophomore defender Bjarne Thiesen had a shot go high off a corner kick. The Mountaineers, still leading 2-1, were challenged with a second tying goal from Marshall in the 60th minute. Off a free kick, Marshall’s junior midfielder Max Schneider found Tekesky flat-footed, scoring the Herd’s fourth 2021 set piece goal. That remained the final score of regulation.

When the Mountain State Derby entered overtime, the Herd was quick to advance and test Tekesky. In the 92nd minute, Herd freshman forward Paulo Lino nearly ended the game with a low ball that was saved at the last second by an unhappy Tekesky. This got the bench areas riled up, eliciting a yellow card directed at WVU redshirt sophomore defender Kyle Lehnert and a Marshall free kick. The result of that free kick was a high shot off the foot of senior defender Nathan Dossantos, but no additional score. With an absence of WVU shots on goal in overtime, the Mountaineers forced a second overtime in Huntington. 100 minutes into the game and yet no winner.

A scrappy second overtime began with a quick Marshall shot that missed wide right off the foot of senior defender Jan-Erik Leinhos. Less than a minute later, Schneider made a run that ended with his respective shot on goal missing wide left. WVU’s Thiesen forced Semmle out of his stupor with a quick shot into the low left corner. No good, but it kicked the Mountaineer offense into gear. Another shot on goal in the 107th minute off the foot of freshman defender Frederik Jorgensen proved to be the final scoring attempt of a disconcerting double overtime draw.

Less than a minute later, Marshall redshirt senior defender, and Morgantown native, Collin Mocyunas went down and stayed down on the pitch. The injury… unclear… but it resulted in a red card issued to junior midfielder Luke McCormick for taunting. A questionable call, and one which sent Stratford into a frenzy. WVU played the remaining two and a half minutes down a man, but it didn’t make a difference. The final score in Huntington was 2-2.

With this draw, the Mountaineers continue to lead the Thundering Herd in the Mountain State Derby record books, at 16-6-2, and remain undefeated. The 4-0-2 Mountaineers will now look forward to heading back home for a Sept. 21 match against Dayton at 7 p.m.

Welcome to the new home of WVU football and basketball breaking news, analysis and recruiting. Like us on Facebook, follow us on Twitter and check us out on YouTube. And don't forget to subscribe for all of our articles delivered directly to your inbox.
Related Topics:Dan StratfordfeatureMarshall Thundering HerdMen's SoccerMountain State DerbyWest VirginiaWVU
Up Next