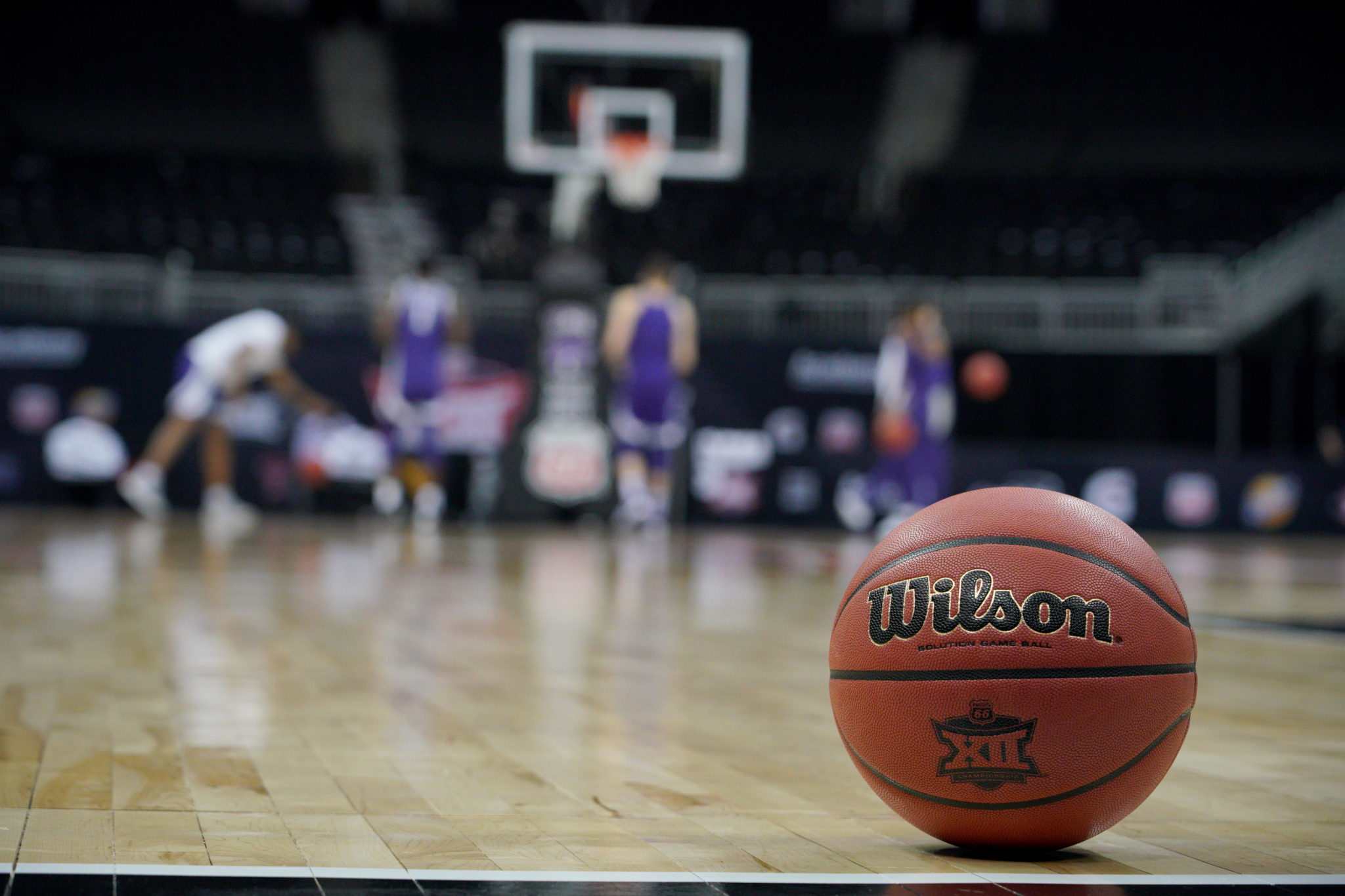 during the Phillips 66 Big 12 Basketball Championship at the T-Mobile Center in Kansas City, Missouri on March 10, 2021. (Denny MedleyBig 12 Conference)

Ken Pomeroy, a college basketball statistician, ranked the Big 12 the best conference in the country in his early preseason rankings. KenPom is factoring in transfer portal activity and incoming freshmen into his rankings.

The SEC, Big 10, Big East and ACC round out the top five conferences in Pomeroy’s rankings.

Preseason conference ratings to excruciating precision. The Big 12 to the stratosphere. pic.twitter.com/uuP8trW2GC

Here’s an update on every team in the Big 12 and what they’ve done this offseason.

Baylor surprisingly lost Matthew Mayer to the transfer portal and lost leading scorer James Akinjo to the NBA. The Bears will still be a great team next year with a core of LJ Cryer and Adam Flagler, added with WVU transfer Jalen Bridges and BYU transfer Caleb Lohner. Baylor also brings in 5-star freshman Keyonte George.

TJ Otzelberger rebuilt the entire Iowa State program in one season, going from two wins in 2020-21 to a Sweet-16 appearance in March. The Cyclones lost Izaiah Brockington to the NBA and Tyrese Hunter to the portal. Iowa State will once again be a defensive-minded team next year adding some quality transfers.

The defending national champions will have their hands full in 2022-23, losing Ochai Agbaji, Christian Braun, Remy Martin, David McCormack and possibly Jalen Wilson. Bill Self has quickly retooled his team, adding Texas Tech transfer Kevin McCullar and the fourth-best recruiting class in the country. the Jayhawks may not be as good next year but still will run the Big 12.

A lot has changed for Kansas State since they lost to WVU in the opening round of the Big 12 tournament. Bruce Weber stepped down the following day and KSU brought in Baylor assistant Jerome Tang to take over. The team lost leading scorer Nijel Pack to the transfer portal.

Porter Moser will be looking to make his first NCAA Tournament with the Sooners in 2023 as he brings in Nevada leading scorer Grant Sherfield and pairs him up with Tanner Groves and Jalen Hill. Oklahoma will be a competitive team next season.

After a one-year postseason ban, Mike Boynton will look to continue the interrupted momentum from the 2021 season that saw a round of 32 appearance. Avery Anderson, Bryce Thompson and Moussa Cisse all return for the Cowboys as Isaac Likekele heads to Ohio State. Boynton lost a few other role players to the transfer portal but isn’t done adding to his team.

TCU has the opportunity to really take it to the next level as they return their entire starting five. The Horned Frogs made some noise at the end of last season losing to No. 1 seed Arizona in the final seconds of a second-round matchup. Jamie Dixon has his chance for his best TCU team during his tenure at Fort Worth.

The Longhorns gained a top five transfer in the country in Tyrese Hunter, pairing him up with Marcus Carr. Chris Beard will have his team ready no matter who’s out there in November.

Texas Tech, along with West Virginia, is probably the most different team from this past season. The Red Raiders lost many players to graduation while losing McCullar and Terrence Shannon to the portal. TTU brings in a great transfer portal class with Fardaws Aimaq (Utah Valley), De’Vion Harmon (Oregon), D’Maurian Williams (Gardner-Webb) and Jaylon Tyson (Texas).

They said Bob Huggins needed to ‘get with the times.’ Well, he did. West Virginia brings in a top transfer portal class next season which includes Emmitt Matthews (Washington), Erik Stevenson (South Carolina), Joe Toussaint (Iowa) and Tre Mitchell (Texas). Huggins and his staff stuck with their go-to JUCO players as well added three incoming players. WVU is looking to turn around what was a terrible conference slate last season.

Welcome to the new home of WVU football and basketball breaking news, analysis and recruiting. Like us on Facebook, follow us on Twitter and check us out on YouTube. And don't forget to subscribe for all of our articles delivered directly to your inbox.
Related Topics:Baylor basketballBig 12 BasketballBob HugginsfeatureIowa State basketballKansas basketballKen PomeroyKenPomTexas Tech basketballWest Virginia Basketball
Up Next