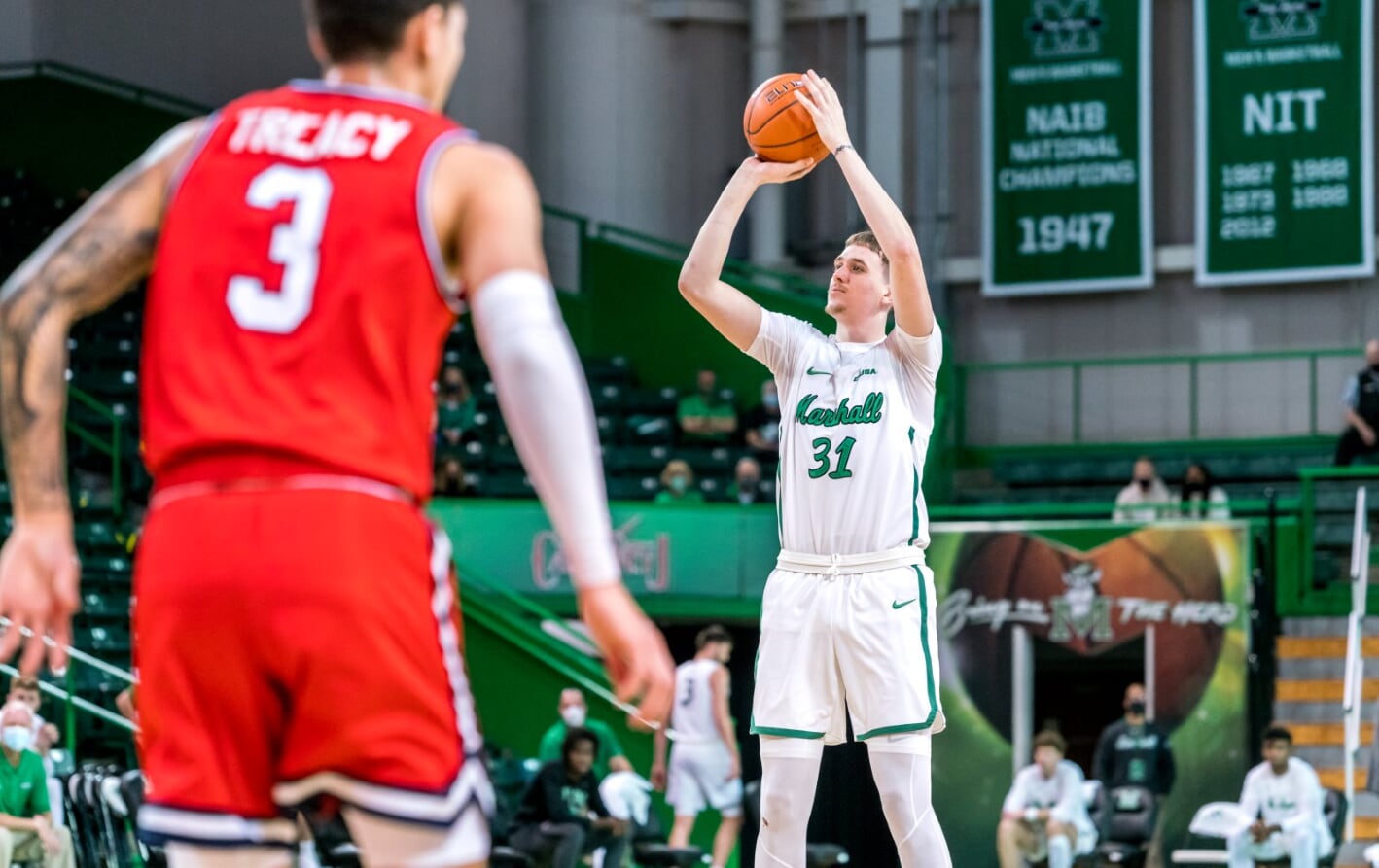 The Marshall University men’s basketball team received a wake-up call not quite two weeks ago in the form of a blown 21-point lead in the second half of an 82-81 loss at Old Dominion.

Starting the next day and continuing through the present, the Thundering Herd has been playing some of its best basketball of the season heading into this weekend’s pair of games at Rice — originally scheduled for Friday and Saturday but according to Marshall coach Dan D’Antoni the games will now be played Saturday and Sunday (though no official announcement has been made as of Wednesday evening by either school or Conference USA).

MU has been overall solid in its three wins since that gut-punch from the Monarchs, and though a glance at the box scores for those games would indicate the Herd’s standout trio of guards — senior Jarrod West, junior Taevion Kinsey and sophomore Andy Taylor — have led the way with statistics a deeper look in to how Marshall has been successful shows just how important the frontcourt’s role has been.

The Marshall coach reasoned that he knows what he’s going to get on a consistent basis from his guards, so the forwards doing their part makes the whole thing work.

“Our guards have established a given. They’re going to be very competitive and they’re going to have good games against anybody,” D’Antoni said during a Wednesday video press conference. “Jannson and Mike — and Obinna and Goran — those four are huge keys for our team. Stats aren’t important for those guys, but playing well is. The ball is dominated by our guards, so [the forwards] may not have the huge stats but what they do — when they do it and they do it efficiently — it opens everything up for those guards.”

None of the four average double-figures in scoring or more than five rebounds per game, but they have a way of being in the right place at the right time and finding the bottom of the basket when called upon. It also wouldn’t be a Dan D’Antoni Marshall team without some big men who can shoot, with Beyers and Williams in particular not afraid to pull from deep. Nobody on the team has attempted more 3-pointers than Williams, who has made 31 of 91 (34.1 percent) from behind the arc. Beyers like to shoot the 3 as well, with 23 makes in 64 attempts (35.9 percent).

D’Antoni pointed specifically to Marshall’s last game for evidence of the forwards’ impact on the MU’s success. The Herd walloped visiting Middle Tennessee with West scoring a career-high 29 points while Kinsey went for 25 while Marshall’s bigs were active on pick-and-rolls. It opened the floor for the guards to get to the basket and made life easy for D’Antoni and his staff on the bench.

“[Middle Tennessee] was so afraid of our dunks on the pick and roll that they were checking the roll guy, then Jarrod and Taevion and Andy went right in and laid it up,” D’Antoni said. “I don’t know how many layups we had just going in for it because they were checking guys so we couldn’t get the alley-oop — which meant that the wings didn’t have to come in and our 3-point shooting and they didn’t kick out. So [MTSU] was trying to take our 3-point shooting and our roll guy out from the rim and all we did was shoot layups. The way the offense is designed you pick your poison. If we’re efficient we’ll take whatever they’re giving us and we’ll beat it.”

When you want to dig a little deeper than a box score for college basketball you turn to Kenpom.com — and the site’s formulas are kind the the Thundering Herd.

“I really hate to say this, but when we blew that lead at ODU the first game that really woke us up,” Beyers said. “We made adjustments that we realized we needed to make and carried those into the games since.”

Welcome to the new home of WVU football and basketball breaking news, analysis and recruiting. Like us on Facebook, follow us on Twitter and check us out on YouTube. And don't forget to subscribe for all of our articles delivered directly to your inbox.
Related Topics:featureJannson WilliamsMarshall BasketballMikel BeyersObinna Anochili-Killen
Up Next

Recruiting Dead Period Extended Through May 31