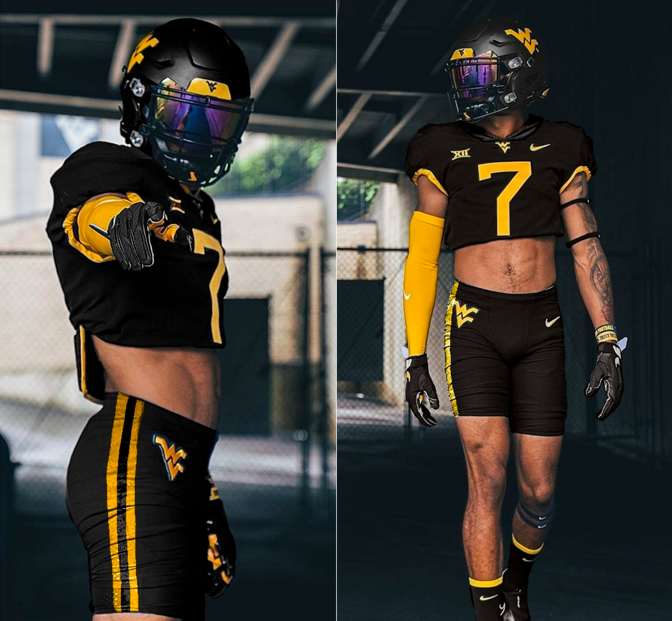 We’ve touched on West Virginia’s constant weekly uniform changes in the past and how most of the fans are split on some combinations veering too far away from the traditional colors of the Mountaineers, but one fan is now suggesting a fresh idea to kickoff the 2023 season on the road in State College.

This fan, who calls himself “BJones WVU” on Twitter, wants Mountaineer Nation to imagine WVU wearing an a mostly all black look to represent over 200 years of coal in the state of West Virginia. His design would be black helmets, black jerseys and black pants with WVU’s shade of gold for the numbers, two stripes down the pants and the flying WV logo on both sides of the helmet. Blue would only be slightly evident as an outline to the stripes and numbers and in a couple placements of the logo.

While some fans have previously voiced a displeasure in some of the alternate uniform combinations that are far removed from how the West Virginia football team appeared for many years, many seemed to reply liking this fan’s suggestion and design.

Former WVU basketball player John Flowers has continuously expressed wanting to see the Mountaineers bring back the black uniforms previously worn by the men’s basketball team during his era. That is even something athletic director talked about when appearing with WVSN’s Mike Asti on a show soon after he was hired. And even though most of the talk about black uniforms centers around basketball, this idea for the Penn State game could spark a conversation about seeing them in football too.

Odds are likely against this happening, certainly not to start a season, but WVU did show up to Pittsburgh to kickoff 2022 the return of the Backyard Brawl wearing a new “Country Roads” labeled uniform, a uniform combination that’s since garnered national recognition as one of the best in the country.

Welcome to the new home of WVU football and basketball breaking news, analysis and recruiting. Like us on Facebook, follow us on Twitter and check us out on YouTube. And don't forget to subscribe for all of our articles delivered directly to your inbox.
Related Topics:Backyard BrawlCollege FootballCollege Football UniformsCountry Roads UniformsfeatureJames Franklinmountaineer nationNeal BrownPenn StatePittPSUState CollegeTwitterWVUWVU fansWVU Uniforms
Up Next