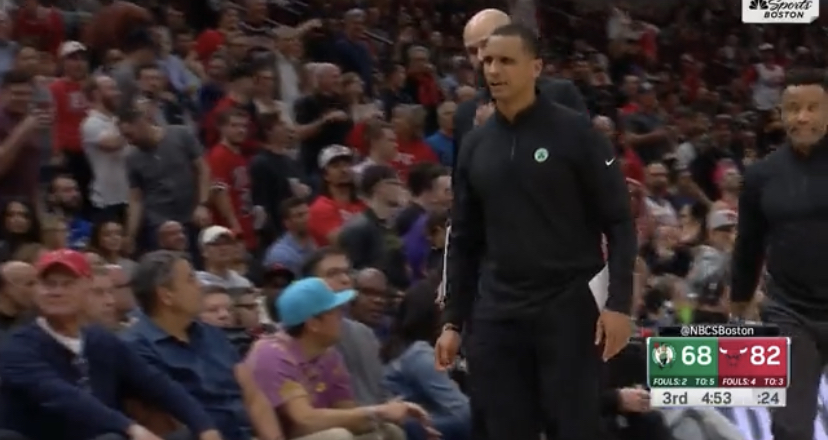 This season is going to be one of a lot of firsts for Celtics head coach Joe Mazzulla.

The West Virginia product was able to secure his first win in the season opener, but Monday night provided Mazzulla two less desirable firsts. Boston lost to the Chicago Bulls, handing Mazzulla his first loss. He was even ejected during the game, the first such occurrence of his new career as an NBA head coach.

As you can see from the video below, Mazzulla appeared confused when informed by the refs that he was being tossed. Mazzulla keeps true to his personality by makes his displeasure known while staying calm and collected as he walks off the court.

Mazzulla took over Boston’s head coaching duties for the suspended Ime Udoka, who violated the Celtics’ organization rules. The ex-Mountaineer will serve as the interim head coach for the 2022-23 season for now.

Mazzulla began pursing a coaching career following his graduation from West Virginia. Following coaching stints at Glenville State and Fairmont State, the former Mountaineer was hired as an assistant of the Maine Red Claws, Boston’s G-League team. Mazzulla went back to Fairmont State in 2017 to serve as the head coach of the Fighting Falcons.
Welcome to the new home of WVU football and basketball breaking news, analysis and recruiting. Like us on Facebook, follow us on Twitter and check us out on YouTube. And don't forget to subscribe for all of our articles delivered directly to your inbox.
Related Topics:Boston CelticsChicago BullsfeatureJoe MazzullaNBAWVU
Up Next