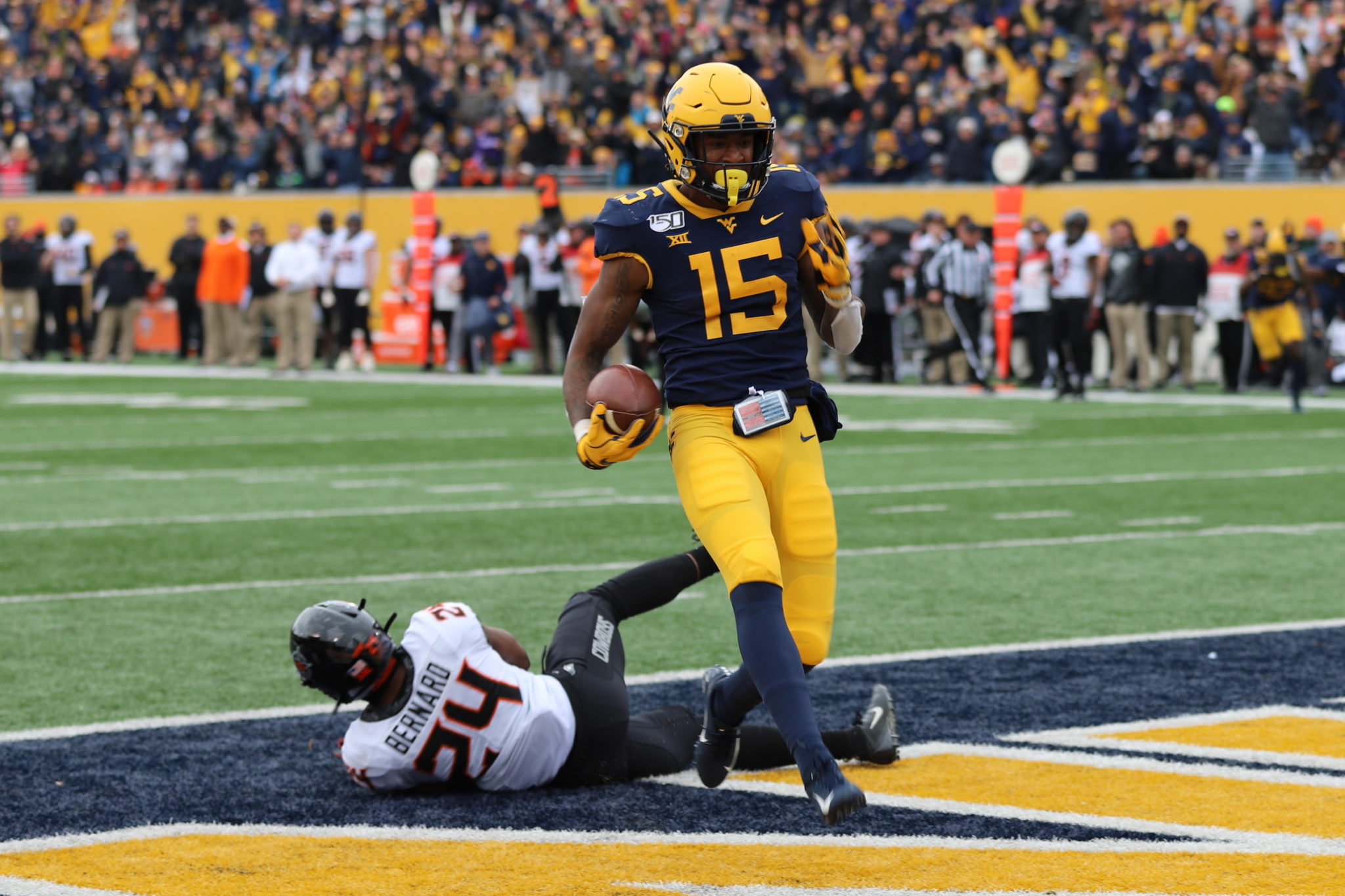 Two plays share the number five spot on this list, both from West Virginia’s near-upset of the then-undefeated Baylor Bears on Halloween. While both of these plays were important because WVU eventually lost to the Bears 17-14 they share a spot on this list.

Baylor was the surprise team in the Big 12 this season, the Bears started the season 7-0 coming into their Halloween matchup with the Mountaineers. West Virginia, on the other hand, was coming into this game on a three-game skid, losing consecutive games to Texas, Iowa State and Oklahoma. WVU was a heavy 17.5-point road underdog in this game.

Plus, this game was going to be broadcast to a national audience as the only game on ESPN on Halloween.

Just like Sam James’ opening touchdown against Texas, Campbell and Wright’s touchdowns showed everyone that Neal Brown and the Mountaineers were not going to be intimidated by another team’s ranking or record.

West Virginia’s defense kept the Mountaineers in the game through the first half limiting Baylor’s offense to only seven points, but the offense struggled so badly it did not look like they would be able to score anything to help out the defense. In the first half, WVU’s offense ran 27 plays and picked up 54 yards, something was going to need to change in the second half if West Virginia was going to have a legitimate shot at the upset.

WVU’s defense came out of the half just as strong as they were in the first, forcing a fumble and a punt on Baylor’s first two drives, but they needed the offense to score some points. Enter, George Campbell.

Campbell was West Virginia’s biggest big-play threat on offense throughout the entire season. On just 19 catches he totaled 469 yards (24.68 average) and seven touchdowns (36.8 touchdown percentage). This 83-yard score against Baylor might have been his biggest play of the entire year. It tied the score 7-7 and showed the national audience that West Virginia really could hang with the Bears.

“You always want to make a play anytime it’s called towards you,” Campbell said following the game. “In the moment that it was in, it being close like that, ended up making it 7-7, it gives our team the momentum and just bring our team back into it with the juice. In that situation, I definitely wanted it, but with all 50/50 balls, you always want to make the catch.”

Just as the West Virginia offense made a breakthrough, Baylor tried to put the game away again. Led by quarterback Charlie Brewer, the Bear went 75 yards and retook the lead over the Mountaineers with a 21-yard touchdown pass.

With how long it took WVU’s offense to score its first touchdown, having to score a second one seemed even more daunting. Luckily, however, the offense did not even need to step onto the field.

The 95-yard touchdown was freshman Winston Wright’s first-ever kick-off return in college. It was WVU’s first return touchdown since 2015 and was an immediate response to Baylor’s touchdown to re-tie the game at 14.

The following week Brown named Wright the primary kick-off returner for the rest of the season.

“We’ve blocked kick-off return really well all year, we just hadn’t done a very good job in the return game. Obviously we just didn’t pick the right guy. Winston got it, took the first one to the house and he’ll obviously be the kick-off returner for the rest of the year.”

Winston finished the season with seven kick-off returns for 193 yards, a 27.57-yard average and pitched in 19 receptions for 97 yards on offense.

Despite eventually losing to Baylor 17-14, these two plays made the game one of the most memorable of the 2019 season and showed a national audience that West Virginia can play with anyone.

Welcome to the new home of WVU football and basketball breaking news, analysis and recruiting. Like us on Facebook, follow us on Twitter and check us out on YouTube. And don't forget to subscribe for all of our articles delivered directly to your inbox.
Related Topics:featureGeorge CampbellNeal BrownWest VirginiaWinston WrightWVUWVU Football
Up Next

7 Plays in 7 Days: Wheaton and Doege Connect for Game-Winning Touchdown in Manhattan